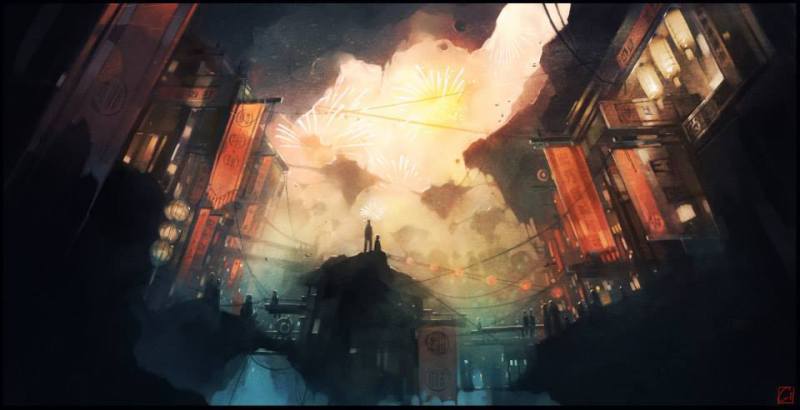 Five Fairytales About the End of the World

Once upon a time—

The world spilt open and everyone walked around the gaps in the ground. There was a place that didn’t exist anymore set into the center of the city. It happened one day as everyone was bustling to and fro, to and fro. They were laughing or talking or thinking about the way clouds made shapes across the sky. Then came the sound. The sound was somewhere between a crack and a roar and the idea of soon-silence. Then there were no noises. The city wept as cities do: in giant waves of anger, then despair, then silent nothing.

Kaye walks. The streets are so silent now. Traffic lights play out their changes and there is no one to take notice. This is the City Where No One Lived.

Kaye walks past empty shop after empty shop until she’s right at the edge of the campus which once served as the city’s heart. When the campus stopped beating everything else stopped as well.

There is only one shop with lights on and the lights pour out onto the snow covered sidewalk; it’s an almost warm glow like paintings of fire.

Kaye steps inside the café. There’s a song on the stereo—some old ballad that she can’t quite name.

“So, you’ve found me,” says a voice from the corner. It is the Woman Who Watches. Her voice is stones at the bottom of a lake, sledding too fast down a hill, concrete against skin.

She is beautiful—skin as white as paper before stories, hair as black as eyes in the dark, lips as read as—

Kaye used to dream of this moment, of finding the Woman but being unable to speak, her voice having long since frozen.

“My feet are bleeding,” Kaye says.

The Woman looks down at Kaye’s feet. “Your shoes are all worn out.”

The Woman waits for Kaye to respond. She waits and watches. She always watches and has done so for as long as the world has told tales. She asks again, “Do you want him back?”

Kaye knows that’s not a possibility. There is only so much that one can ask for; you always have to know the statistics or you’ll always be disappointed.

“I just wanted to let him know something.”

Kaye says, “I just wanted to let him know that I missed him.”

Devin met Death once in the city three years earlier. Death was surprised by this because it hadn’t been Devin’s time yet. They ended up going for a cup of coffee. They talked for hours and exchanged numbers with promises to keep in touch.

When Devin met Death, again, he was shocked. He felt downright betrayed. “But, Death, you know me!”

“I know everyone.” Death said. Death’s voice was boats breaking up in the middle of the sea and buildings crumbling in wartime and ice that cracks too soon.

“But, Death, I thought we were friends!” Devin exclaimed.

Death blinked, once, and somewhere an elevator plummeted into a basement. “But, Devin, I’m Death. I treat everyone equally.”

There was once a little girl who lived in the woods with her beloved parents. One day she went out and into the city. She wanted to learn everything that she could about the world. It seemed so giant, so unknowable, so distant.

Her parents warned her of many things: of wolves that might catch her, of castles that might trap her, of poisons she might consume. The girl listened carefully. She listened until she knew everything about danger.

The girl fell in love and out of love. She learned things and forgot things. Still she always remembered what her parents had told her.

One day, the girl was walking across concrete amongst the many. She heard the sky break apart with noise. As she fell, she wondered what her parents had taught her. She had seen no wolf and still she was eaten all up.

She went to school to learn all that she could about immortality. She read ancient texts and studied many diagrams. Then one day she fell in love. Love made her forget about life everlasting. She thought that no one in love could die. That wasn’t how stories end.

She forgot completely and totally. She forgot until the day the silence came. She was walking with him when it hit. The light shattered around her in one final sound. On the ground, her lover kissed her. He kissed her and kissed her. Still she would not wake up.

Lira sips a coffee while walking to class. It’s a Tuesday, that day of the week that’s always so average that she forgets which day she is on. She is thinking about her book. She is writing it on themes of death in fairy tales and how they contain elements of the apocalyptic. She is thinking of Iron shoes and waters of life, of Godmothers who bless children with demise, of sleepers and dreamers, of everything that a fairy tale is. Then someone screams. And shots ring out and she’s on the ground. But the clouds seem so close and she’s thinking that she should change her theme. She suddenly wants to write about everything else. She wants to write about how Cordelia does stir finally, how Death suddenly relights the million candles, how the nightingale keeps singing, and the foam takes no one, and ice chips never get into hearts and lodge there. She was thinking that she could give the apocalypse up. Change her thesis to something filled up with the lessons the tales had taught her—that moment when her eyes snap open and the court rejoices and the dancers leap out in graceful spins and the voice of her mother is saying Happily ever after—

Before the world ends for real.

Chloe N. Clark is an MFA candidate in Creative Writing & Environment. Her work has appeared in Booth, Menacing Hedge, and more. For her ideas about baked goods (including gingerbread), stage magic, and all things fandom, follow her @PintsNCupcakes

One thought on “Five Fairytales About the End of the World”