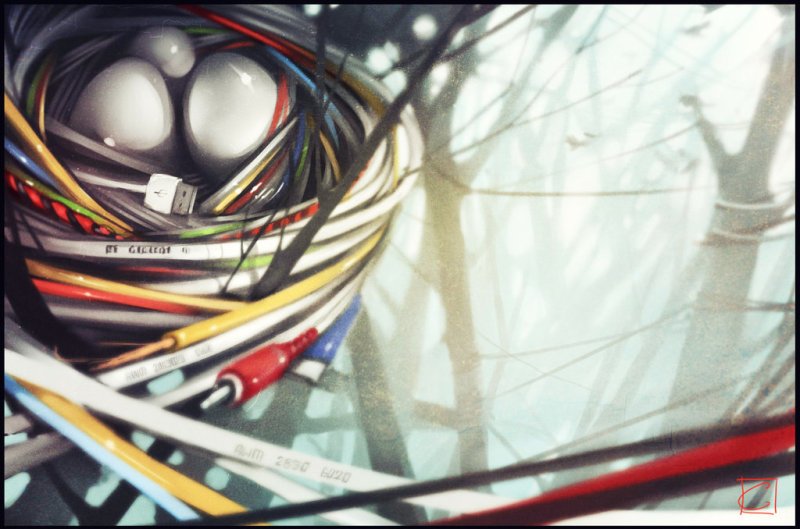 There is the story of the boy who awoke one morning to discover on his stomach a viral sprouting of tiny televisions. The story of the Benevolent Jubilance, who before dying from a throatful of iPods taught her son dial zero for panic. The story of a spreading pandemic, the product of rogue wires gone awry. The story of the streets of New Volta—sidewalks flickering snowy static their infectious antennae tripping pedestrians, impaling small cats and frying pet lizards who long to lick the frenzied flash of the screens. The story of the mayor, Apollo the Paranoid, leading the evacuation charge toward Parabola Valley while sucking on magnets in his monolith convertible, calling for martial law as the analog armies come marching in polarity rifles aimed skyward. The story of a slow shrugging Tubezilla, punching armored hot air balloons out of the horizon with his digital mitt of flat screens, leveling deluxe teepees with theater feet shrieking commercial jingles and obscure sitcom theme songs as a death blare to the manic masses. The story of our dearly departed boy having passed on to hologram heaven, whose holy ganglia remains encased in the museum of martyrs, whose sacrificial explosion remains an inspiration to technophobes and New Amish everywhere who continue to evangelize the dangers of underage voltaic consumption as the Wireless Abstinence Spark-Free Teetotalers of America.

There is the story of the angel who chopped off her wings, in their place affixing twin chainsaws. The story of a benign comedy. The story of the punk angel who preferred electric guitar’s neon scream to the soft harp’s tinkling. The story of the metal Mohawk converted from dainty halo, milk-white robes burned in lieu of tight leather with plenty zippers, pearl piercings skull buttons and razorblade cloud tattoos. The story of the seraph who found paradise boring, who slipped through the ivory gate at midnight absconding with her death metal soul. The true story of how the devil came to inherit rock and roll.

There is the story of the sleepless detective and his unsolved investigation of daylight’s disappearance—the case of a thousand and three consecutive nights in a row. The story of stabbing rain, chronic headaches, coffee-stained neckties and stars coughing noir. The story of graffiti creeping their cigarette eyes sliding over back alley bricks, of shadow henchmen spray painted by pulp rebel wizards. The story of the sun swallowed by a phantom skyscraper, the grizzled dick, his architect arch nemesis and Tommy wand wielding trigger-happy goons. The story of death by yawning: a fatal wink slung by lady slumber, the ongoing insomniac apocalypse and continuing curse of Midnight City.

There is the story of the big bad wolf retiring, born again at a Red Riding Revival. The story of a 12-step program for the unhappily ever after, Fiends Anonymous addicted to habitual villainy and sinister scheming. The story of the lie they live to prove wrong, the daily mantra they’re taught to chant every morning in front of their magic mirrors: You are not a bad person, you were just written that way. The story of the witch weaning her appetite for children, the giant with a phobia of beans, the spider fighting his fix for girls with curds and whey, and the Pied Piper struggling to learn an alternative instrument by moonlight. The story of a violent relapse brought about by paper cut: the wolf weeping in a corner at the sight of red swirling in his palm. The story of how it only takes a prick to plunge the past to overflowing.

There is the story of the author with a farewell affliction, deathly allergic to endings. The story of the writer who would ritually rip out the last page of every book, too fragile for finishings, unequipped for the eventual exit of everyone dear to him. The story of the kid who kept all his goodbyes in a glass case, all his beloved characters cocooned. The story of the wordsmith who refused to wave, who forbade the phrase good night and see you soon to slip his lip. The story of the writer who spared himself the bittersweet grief of it all, switching souls with a freckled shell and tossing himself into the sea, only to be inhabited by a billion crabs for eternity. The story of contrapasso: the crabs that would never bother to utter goodbye or hello upon leaving their human home hollow.

Matthew Burnside is the author of Escapologies (Red Bird Chapbooks), Infinity’s Jukebox (Passenger Side Books), Book of If&Ever, a chapbook for charity (Red Bird), and the forthcoming Ritual Hauntings (Patasola Press). His work has appeared or is forthcoming in DIAGRAM, Omniverse, Ninth Letter, PANK, Kill Author, Gargoyle, Hobart, NAP, and others. He currently teaches creative writing for new media at the Iowa Writers’ Workshop.