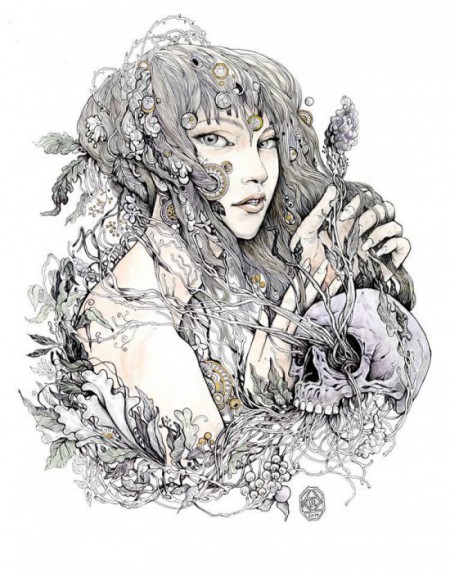 Outside the entrance to the Underworld, the vendors were making a brisk business. They sold rings with pomegranate seeds for jewels, stoppered bottles with water from three sacred rivers, twists of drinking straws resembling the Hydra, plush three-headed dogs for little children. Also carnelian-striped conches that echoed the shrieks of Harpies when held to the ear. Many paperweight statues of the abduction of Persephone. Spotted lizards, too, and for a little more, a terrarium habitat to take it home in. The entire kit was called the Wrath of Demeter, and it kept selling out by the end of each day.
And there was food. They sold an assortment of foods that Hades must have tempted his young bride with—hot honeyed breads baked golden and stuffed with pomegranate, jeweled grapes, seared and succulent lamb, sweet barley-and-mint drinks. The smoke of burning meat kept rising and falling on the air.

Each new bus birthed a new group of tourists. Because there were so many people, they could only shuffle past the entrance in a single-file line. Policemen were stationed there to ensure no one stopped overlong. Not to ensure order or quiet, because it was orderly, and everyone was behaving quietly. The vendors whispered, “Figs and dates, fit for the queen” and “Silk, silk spun by the very same silkmoths she owns.” A musician only held the trembling strings of his lute with his fingertips. He sold CDs of his music, recordings of the same songs Orpheus played when he strode down to reclaim his bride.

The visitors did not step out of place. They purchased small bundles of tied together flowers from the pretty young girl selling them up and down the line—rose, lily and larkspur, the favored flowers gathered by Persephone—while her brother passed them handfuls of grey asphodel, the gossamer food of the dead—and when they drew close to the opening, they tossed the flowers inside. So many flowers, it seemed the mound of them must swell so high as to block from the sight the tunnel’s opening.

Instead, their meager offerings seemed to melt at once into the black soil. All the spring flowers, the little buds and slim stems tangled together, crushed underfoot by the weight of yawning darkness.

When they peered into the entrance, they saw it was twilight inside, no matter the time of day it was outside. They saw plants blooming under the earth that did not grow under the sun. They saw a sliver of a vein that pulsed diamonds and pristine minerals from a wall flecked with gold. They heard, out of sight, a gurgle and a murmur of five rivers meeting.

LiAnn Yim received her M.F.A. in Creative Writing from the University of Maryland. Her work has appeared in The Nation, New Haven Review, Toasted Cake, Drabblecast, and NANO Fiction.

Older: Gretel and Hansel at the Church of the Greater Temple of Deliverance
Newer: Letters to Jacob and Wilhelm
%d bloggers like this: