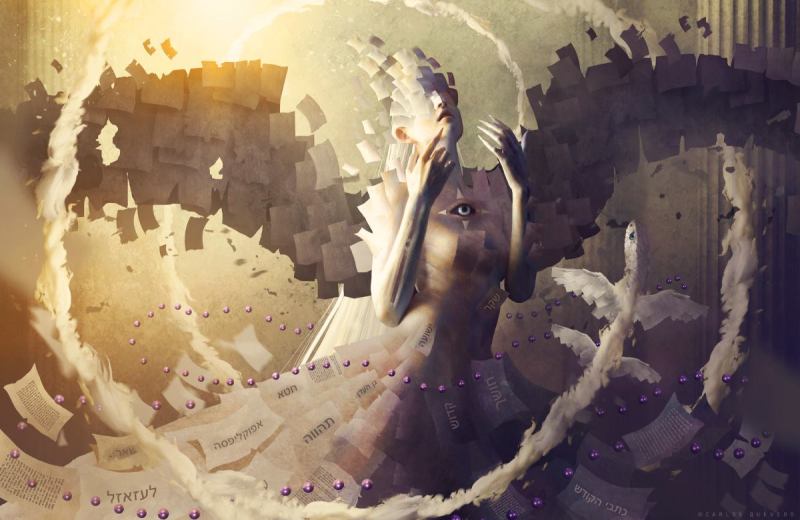 Galatea, Self Portrait in Fragments

Galatea was once an ivory tusk. She curved skyward, white smooth sickle under an elephant lip. This was the African interior, drier than Cyprus, wilder, blazed gold with grasses. The elephant’s head tossed, huge and hot and dust pale, flies lifting and landing, lifting and landing, around the big globe eyes.

But to be more accurate—Galatea was once many tusks, some from Africa, some from Asia, where the forest grew so densely green it hid the horizon. The tusks of a dozen elephants, once used to plow the earth, to dig and bore for food or just for fun, or else used as mating ritual weapons that clattered and clashed across the plains.

She knows some of this from Pygmalion’s records, although, admittedly, she has filled in a few details herself.

But so here’s what she wonders: is she, Galatea, the same as the tusks from which she was carved? And if so, is she the same as the elephants from which the tusks came, twelve separate animals from two separate continents? Was it, in fact, she, Galatea, who bathed herself in the yellow Ganges, who stripped the bark from a baobab tree, tusk tip rooting in the soft wood pulp?

She has asked Pygmalion about this, and he said no, unequivocally. None of that was her.

And perhaps he is right; after all she remembers none of it. Not the elephants loping through the savannah, not the bundled ivory in the boat, rocking to the rhythm of the Aegean, headed for the Cyprus merchants. The first thing she remembers is his mouth on her mouth, looking down at her naked body as the chiseled mineral pinked with its first blood-blush. The nerves sparked in her feet; her knees gave way. This is what Pygmalion calls her birth.

Pygmalion is particular about his studio. He likes her in there, but never unsupervised. She is to sit between the blocks of rock and stay very still.

Today he is at the wheel. Ivory is his medium of choice, but when that’s scarce he’ll turn to marble or clay. He has large hands. Bulbed knuckles. Galatea watches the clay spin like liquid between his broad palms. Watching him work fascinates, unnerves, sickens her.

“What are you working on?” she asks.

She fills a jug and takes it to him. He kisses her elbow. “You’re so beautiful,” he says. “You’re perfect.” She hears in his voice love, pain, pride. She knows what’s coming.

Pygmalion stops the wheel, smashes his spire of clay flat with a groan.

“I can’t, can’t, can’t, can’t!” he cries. He grabs her waist with his clay-wet hands, weeps into her stomach. He’s been like this for weeks. Unable to produce. He explains that it’s her, she’s too perfect, how can he match that? How can he achieve such symmetry, such balance, such proportion a second time? He weeps and groans and she provides sympathy, and then usually he tears off her dress and pins her to a work table and has his way with her; after which, he feels better.

Galatea dreams she is being sliced like butter. She is watching this happen, located somewhere outside her own body. There is the first self, being sliced, there is the second self, fleshless, invisible, its existence confirmed only by the act of gazing itself. Gazing, gazed at. Which is she really?

“I need a new aesthetic theory,” he says. “The old one is failing me. I’ll need you to stay out of the studio for a while. You’ll only distract me.”

He locks himself up. Galatea, unsure what to do with herself, walks down to the beach and stands barefoot in the yellow sand. The sole of her left foot is scarred with his signature. Wherever she walks, he walks with her.

Along the beach, she collects cockle shells, drift wood, fallen fig leaves. Textures still feel new on her skin. She gathers gull down too soft to be real. She submerges her hands in the water and stares at them for a long time. Light waves shift in her palms. To think—he chose each detail, carved each crease, all the tiny crescents of her fingernails. She imagines the white filings falling. Does she reside in those discarded scraps, the negative space they left behind? Where does she begin, where does she end?

“Sculpture is superior to painting because it inhabits three-dimensional space,” Pygmalion told her once, in bed. “Your depth is no illusion. Your substance, not imaginary.”

“I have written my manifesto,” says Pygmalion after several weeks. “Every artistic movement requires a manifesto.”

“You feature quite prominently. There’s a whole exegetical section devoted to you.”

He reads her a few choice excerpts.

He says, “The problem, for the artist, is that every work is both an extension of himself and something other than himself.”

He says, “The work that rejects its creator’s signature bastardizes itself.”

He says, “All art is self-portraiture.”

Galatea frowns. “What did you say about me?” she asks.

“Wouldn’t you like to know,” says Pygmalion, and he tucks the manuscript away.

The theoretical component complete, Pygmalion sequesters himself again to attempt its execution. Galatea spends increasing amounts of time on the beach, watching the waves and wondering if she is standing in the same ocean as she did yesterday. To her amazement, her shoulders begin to blister and burn. The skin reddens, then flakes off, greyish. She catches the peelings in her palm. “This is me,” she says. There is new, clean skin on her shoulders now. She slips the dead stuff in her pocket.

Galatea lies awake next to the sleeping Pygmalion. The window opens onto a warm night, cricket song, the smells of fennel and Jerusalem sage. She is restless. She thinks about Pygmalion’s manifesto, wonders what secrets about herself she might discover inside. Perhaps there is a diagram. Perhaps she’ll find her name, followed by a colon and a concise definition. Perhaps she’ll find out what symmetry has to do with anything.

She gets up, crosses the room very softly. Down the hall, up the stairs, to the studio door. It’s unlocked. Why should he lock it? She’s never given him reason to expect defiance.

Inside, the room is dusky with penumbras. The window spills a parallelogram of moonlight onto the floor. Even in the semi-dark, Galatea can identify a number of new sculptures. She steps closer and sees bodies, women’s bodies, as per usual. But these are different. They are incomplete: a torso lacking head and limbs; a single leg, lopped at the hip; a number of arms; one large breast.

She shivers. She is confused. How many lectures has she heard Pygmalion give, waxing at length on the virtue of the female form? And now he’s gone and chopped it up.

She no longer wants to read the manifesto. Instead, she wants to take something. She runs her fingers over the ivory body parts, settles on a hand with its fingers gently extended, as if offering something.

She stows the hand under her nightgown and leaves the studio.

On subsequent nights, Galatea steals: a 25 lb. block of clay, a spool of wire, three differently shaped sculpting blades, a chisel, calipers, and a bottle of paste. She packs the aforementioned into a bag and stores it all under a carob tree down by the beach. She has no particular intention for the supplies, but finds the thievery thrilling.

A week of nightly forays has left Galatea tired, and tonight she falls quickly asleep. She dreams she is gathering her own body parts along the beach, organs sculpted from stone which she stuffs back inside her stomach. She finds her foot bobbing on the tide and tries to reattach it but can’t. The footless knob of her leg throbs. It pulses with blood. The pain worsens and worsens until it wakes her with a start.

Pygmalion is kneeling at the foot of the bed. He’s pulled the blankets back and is hacking at her heel with a knife.

Even on her bandaged foot, Galatea manages to walk down to the beach. She needs to get out. To get away. (But how? But where?) She hobbles to the shore and sits underneath the carob tree. She is frightened. She is frightened of Pygmalion, whose eyes rove her body like a blade. But she is mostly frightened of herself, the way she lay there still and silent as he carved a chunk from her flesh.

She understands herself to be a figure, an outline. A placeholder for Woman. Form lacking content. An assemblage, capable of being disassembled.

She wants to make something. She opens the bag of stolen supplies, to which she has added her collected beach detritus and the flakes of her own dead skin. Such a haphazard amalgam.

She begins cutting and pasting. Wire binds shells to driftwood, clay plasters feathers together. She covers the ivory hand in a mosaic of peeled skin. She adds and adds and adds.

Pygmalion is going to kill her. She knows this. He will detach her from her body piece by piece. At which point, she wonders, will she stop existing? If he begins at the ankles and wrists, moves up to elbows and knees, proceeds joint by joint, when will she finally cease to contain herself?

Her sculpture—her collage—is finished. It’s large and ugly, and looking at it requires her eyes to bounce from piece to piece, never landing anywhere for more than a second. Every artistic movement requires a manifesto, said Pygmalion. What would hers be? She’s unsure. But whatever this is, she likes it.

Alyssa Quinn is an MFA candidate at Western Washington University, where she teaches English composition and works as the assistant managing editor of the Bellingham Review. Her work has appeared or is forthcoming in Ninth Letter, Brevity, Sweet, So to Speak, Punctuate, and elsewhere.