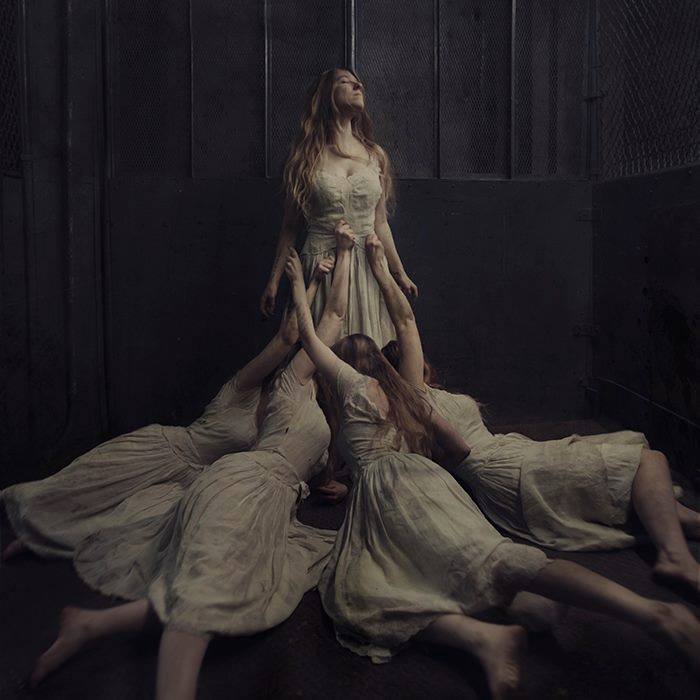 She left behind all that she knew.  Joining her husband’s clan for the first time, she felt like she entered the wolf’s den.

The women in the house hummed. They did not bother themselves with the newly wedded wife. Some were in the kitchen violently chopping up the vegetables for the stew, others had their hands deep in the sink, thick with soap, washing the dishes. A few ran about the dwelling tidying and vacuuming. The elderly ones were at the large oak dining table, quiet, heads bowed and covered in flour as they kneaded bread. The men sat under the trees, smoking. In the garden she thought she heard an owl hoot. The young girls ran up to her. They were four of them, five of them, ten of them. They stood at a distance playing their secret games. Every now and then they stared at her as if they knew what was to come. They giggled as if she still wore her wedding dress, a dress too big for a small house out in the country. They frowned as if it were her stained childhood nightgown. Their faces twisted in disgust as if her body still dripped in blood.

The girls grew older. Her dress corroded into gray ashes and the moths devoured her nightgown. By the time the girls had attended their own sacrificial altars, she was naked. New ones, clad in diapers, arrived; some of these she had birthed herself. They held hands and pranced around her, singing, Ring around the rosie. A pocket full of posies. Ashes, ashes. We all fall down.Her fingernails pierced the skin where her heart was, taking the words, stuffing them inside, then using thread and needle sewed herself up. The words wriggled like worms, spreading about like fire. They covered her hips and legs, ran up her arms and calves, twisted inside her belly and tangled themselves under her tongue. She contorted, slumped and stooped till her head grazed the grass.

Before her skull did an everlasting kiss to the dust, she uprooted herself; ignoring the pains and the children’s stares. Standing tall, her eyes followed the curved world that ran into an eternal loop. Among these lands there other women, who like her, were racked with afflictions and filled with lamentations, crooked and hunched, gray and old. There were a few that were not. She stared at them in awe until it became too much.

Xenia Taiga lives in southern China with a cockatiel, a turtle and an Englishman. http://xeniataiga.com/.