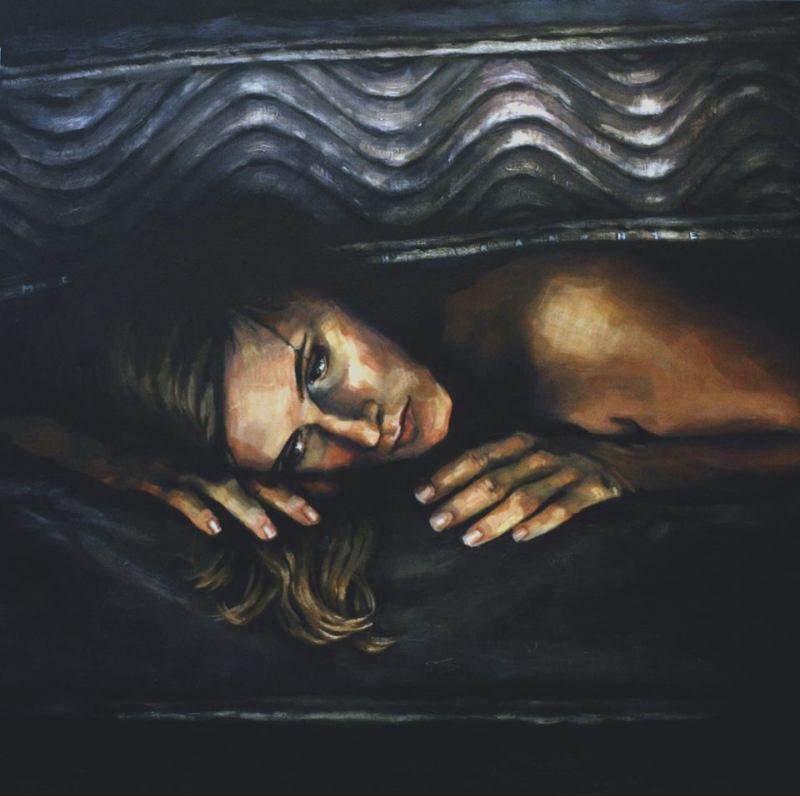 The woman lays face down on the bed, her dark hair covering her face. She squeezes the sheets between her fists as tightly as she squeezes her eyes shut. The man hovers over her.

She whimpers in reply.

“One, two, three,” he counts and on three he plunges the needle into her backside. She can’t help the gasp that escapes her throat. He counts to three again as he pushes the plunger down, releasing the liquid inside her. Then the needle is removed, a tissue applied to staunch bright red blood.

Her lower back is covered with injection sites: sore, bloody, bruised, scabbed over. She’s glad she can’t see them in the mirror. The woman is terrified of needles. So is her husband, but he dutifully gives her the shots each night. They wait and they hope.

The woman takes the shots because she believes in the power of science, but science fails her. There is no baby growing inside her. The barren woman wastes away.  Her soul, once filled with inextinguishable hope, flickers and dies.

She lays in bed at all hours, dark curtains blocking out the life outside. At first the husband grieves with her, they hold each other tightly beneath the covers. Then the husband moves to the chair by the bed, then leaves the room. He cannot continue this way. He cannot stand to try again. It hasn’t worked so many times before. Slowly, and then suddenly, he fades away, finds a new woman and has children with her. His previous wife weeps. He will not speak to her any longer on the phone. He will not talk about the ghost child, the one that should have been there’s.

The woman lives in a lonely house and the only thing that grows is the garden, fragrant and thriving, a mockery. The garden grows with no help from the woman, who would kill each plant, strangle each flower if she could. But the seeds find the soil and the soil nurtures the plants and they grow and grow. The barren woman refuses to partake in the garden’s bounty. She microwaves her frozen food and pulls the curtain down over the kitchen window that looks out into the garden.

The woman who moves next door to the barren woman loves the small, dark leafy greens. The barren woman gives them out freely, she has no use for things that grow. She imagines how old her child would be now, laughing, playing, tending to the garden herself maybe. The woman wants to be whole.

When the woman next door becomes pregnant, the barren woman hisses under her breath and refuses the woman the lettuce she loves. The barren woman’s soul shrivels and turns to dust. She watches the woman from the window next to the tv. She shops for the baby, teeny tiny clothes, diapers, little mittens the size of an egg so the baby won’t scratch its face. She shows these things to the barren woman over the fence that separates their yards, not knowing that each breath she takes, each time she glows from within, is a direct and personal affront to her neighbor. The woman asks intermittently for lettuce, the barren woman tells her it’s no good, a bad crop this year, though the pregnant woman sees it flourishing next to the tomatoes and licks her lips in want.

She imagines her neighbor’s full womb, the baby inside kicking, its heart beating in time with her own. The boyfriend, desperate, asks for the small, dark lettuce again. The barren woman refuses until the woman’s belly swells to the size of a watermelon. Then she finally agrees; she even makes a delicious salad with hardboiled eggs and bacon and brings it over to their house.

She watches as the woman absently rests her hand on her stomach and eats. The man wolfs down the tender leaves as well.  They eat and eat. They fall asleep just as the woman had planned.

The barren woman cuts and cuts, no longer afraid of sharp things or blood. Then the baby cries in her arms.  It’s like she can breathe again for the first time. The baby is soft and real and whole and hers. She flees and takes the baby far, far away where no one will never find them. The woman does not forget what she’s done, cannot forget, so she lets the child’s name be a reminder of the things she did for love. She believes her soul still exists and that now, it sings.

At this very moment, the child brings her a bunch of wildflowers she’s picked from the meadow near their home. The woman smiles, brushes the girl’s golden hair out of her face, and plants a tender kiss on the tip of her nose.

Language lover, art enthusiast, and tea aficionado, Catherine Jones is a college professor and writer of novels, short stories, and poetry. You can follow her writing adventures on Twitter @catjanejones.

Older: What to Eat When You Will Not Eat the Doe’s Heart
Newer: Don’t Ask Me Why I’m Single
%d bloggers like this: