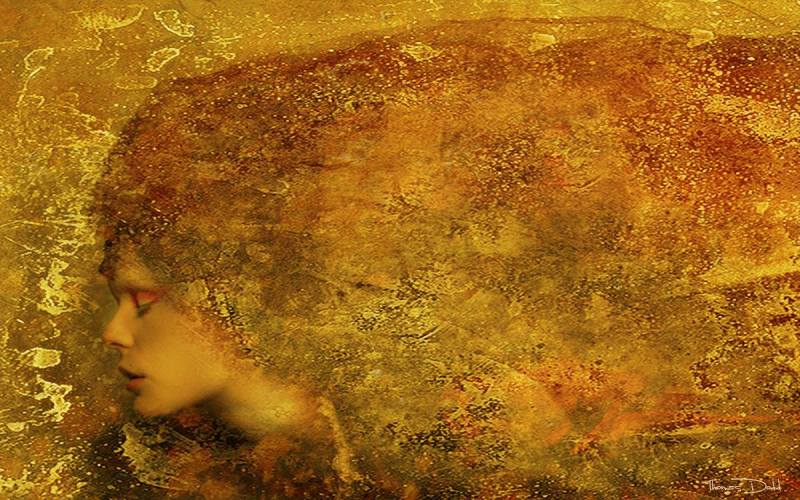 The Woman With Golden Tears

The men of Silverkeep made her weep. They strung her up in the town square to a fat post, agreed to throw the key onto the lake’s floor. They fought over who could cut her next. One tried to dismember her hands. Another asked to wed her. She had stumbled into their town on a Sunday, gold littering her footprints. No one knew her name.

She spit. She kept quiet. She never even whimpered. She learned to not cry. On the fortieth day that she stood chained, her last tear fell.

Two men drowned diving into the lake for the key. The others passed each other in the night, eyeing her, eyeing each other. They could not agree how close to bring her to death. How much to scald. How much to flay. She refused bread, water.

All the while the women rushed in the streets, spending the last tears their husbands had reaped. Their purses became light. They considered the woman. One raised a knife.

A chapman traveled through Silverkeep on the fiftieth day. He walked past, adverted his eyes. He took a room, then in the dark he went to the fields and caught fire to every crop. While the townspeople rushed to witness their grains turn to ash, he took an axe to the woman’s post. He drug her and the post to his covered wagon. Beneath scraps of string and cloth, he hid her. Down a black road they hurried away from the flames.

Why did they chain you? he asked.

In a limestone cave, he separated the chains from the post, but found he could not break the lock on her wrists. She rested on the ground, her hands weighted with iron. In her sleep, she wept. The cave filled with gold as she dreamed. It fell from the cave’s mouth. The chapman gathered some of her tears in his pocket. He woke the woman and told her to hide in the forest behind the cave. He returned in a few days with three hired guards and five stonemasons.

I will build you a castle, he whispered into the trees.

The safer the woman felt, the more she cried. Gold fell to the forest floor. The more she cried, the faster the castle was built. Soon the chapman told her their home was complete. She climbed down from a tree. He led her through six sets of doors. She slept in her own bed of feathers, sheets weaved with gold thread.

The chapman surrounded her with gowns and jewels and paintings. But he grieved that he could not remove her chains. They were so heavy she barely moved. She spent her days next to the window, considering the birds.

He hired an army and led them to Silverkeep. He instructed the entire town to drink the lake. Everyone spread around the shoreline and cupped the salt water to their mouths. He promised them gold. They choked and coughed. Their bellies swelled.

Soon all the town died drinking the lake, even the children. The chapman drank the few spoonfuls of water that remained. He pulled the key from his mouth. He turned towards the road to the castle, his army marching behind him, daydreaming of asking the woman for a dance, of how graceful she would be without chains.

But behind the six doors, she had eaten away her hands. She danced alone, the chains cast aside. She wore a blue gown streaked with blood. Flowers fell from her feet. The birds gathered at her window to learn the new song she sang. They carried it back through the air, over the head of the chapman and his army. Blue petals fell from their flight. All the way to the castle—a dawn-scented path.

Lauren Davis is the author of Each Wild Thing’s Consent (Poetry Wolf Press). She holds an MFA from the Bennington Writing Seminars, and her poetry and essays can be found in publications such as Prairie Schooner, Spillway, Empty Mirror, and Lunch Ticket. Her flash fiction is forthcoming in Automata and Cabinet of Heed. Davis teaches at The Writers’ Workshoppe in Port Townsend, WA, and she works as an editor at The Tishman Review.

One thought on “The Woman With Golden Tears”