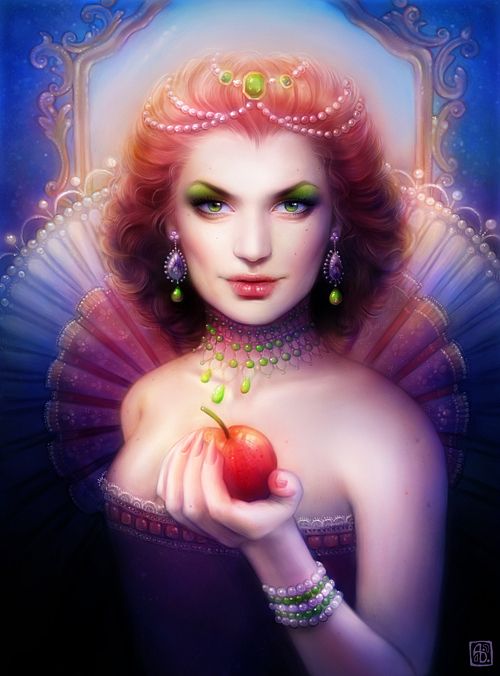 I once read Snow White every day for a week.

On the first day, I read Snow White and considered the color red.  As many versions of red exist as there are fairy tales: carmine, cadmium, ruby, claret, blood-red, wine-red, scarlet, rose, sanguine, vermillion.  Tales are spun like a spider’s web, and Snow White’s the spider with her jet-black mane and shiny lips.  Snow White and her seven dwarves make eight; the legs of the spider ensnare us as she spins her tale of silk, capturing my imagination.

I stood in front of my mirror at home and examined my hair.  I let the water run.  Snow fell silently upon the window ledge nearby.  I peered into the porcelain sink.  A small, milky-white spider struggled at the edge of the water, flailing its legs, curling its body, about to be swept by the tide.

I did not want to be responsible for her death.  I scooped her out of the sink with the edge of my comb and laid her on the counter where it was dry.

I watched, and the spider stretched her legs, extended one in the air like a white flag of surrender, and expanded her belly.  Then she was still again.

A witch’s scars are the color of white flags, but her blood is vermilion like powdered red bones and cinnabar.

The word vermilion comes from the Old French vermeillonwhich is derived from the Latin vermiswhich means worm.  Red is the worm, in the center of the apple, wriggling its way to the shiny red surface: birthing itself.

On the second day I reread Snow White, I bled.  I stood alone in the still morning of my bathroom.  The blood spilled fresh and bright and surprising; it ran down my pale leg in long lines, pooling on the floor.  The doctor ordered tests, so I let a woman pierce me and conjure red from my arm like a witch casting a spell.  But it wasn’t red; it was dark purple, almost black, and shiny like a belladonna berry. A bruise quickly rose to the surface in the soft curve of my elbow where the prick had been, the shape of an apple slice.

I could not bear the blood and the bruise, and I whimpered silently in the bathroom, but no tears appeared.  I was shriveled, a witch myself, but without her magic.  When I returned home, my love offered to press her lips to the crease of my elbow. I wanted her lips and arms to wrap around me like the sea.  I should have seen the red flags.  We wanted such different things.  She wanted a baby, and I wanted a beating heart.

On the third day I reread Snow White, my brother gave me an apple.  We were at work together in the mines, and we were in the red.

It was a red delicious.  Which apple did the hag offer?  Her bone-white fingers held, upturned, in the palm of her hand, the shiny gift.  It robbed Snow White of life as it robbed Alan Turing, so the story goes.  That bite was pure and white as snow, the flesh of the apple exposed, the whites of their teeth tearing into the skin of it; the sweet juice collecting in the corners of their lips.

The red delicious apple was harvested first in Iowa in the 1880’s.  It was a blush-yellow, nothing like the gnarled, russet, tooth-shaped specimen we know today.  Was it sweeter then?

In the skin of the apple my brother gave me, I saw pin pricks of white like stars in the night sky, constellations of light in the firmament.

I thought about the seeds inside, which bring life, and the destruction it takes, and the tearing of the skin to get there, like giving birth.

On the fourth day I reread Snow White. These are the stories:

According to Barthelme, Snow White is writing a poem about four pages long in which the first words are “bandagedandwounded all run together.”  Are the bandages in the crook of her elbow too?

The stories collapsed on themselves. I bit at them until the core remained.

My core is this: I am five at Disney World with my family.  My mother and I wait in a long, tired line to meet Snow White.  I am awestruck.  I am in love. As I lean in for my picture with the princess, my mother whispers to her, “Sweetie, you’ve got lipstick on your teeth.”

Please fill-in-your-own core below, keeping in mind that there should be a moral, and that Snow White is never 31.

On the sixth day I reread Snow White, it snowed again.  A queen sits at her window watching the snow fall; she is sewing.  She pricks her finger, and three drops of blood fall on the snow, collecting on the black windowsill.  She wishes she had a daughter with lips as red as the blood, skin as white as the snow, and hair as black as the ebony windowsill.  A child is born, according to her wishes, and she wants it dead.

And on the seventh day I reread Snow White, I stood once more at the mirror.  The bruise crept down my arm, expanded, like the belly of the spider or the tide of the sea.  And the milky-white spider, well, she was gone.  Perhaps she escaped from me.

I moved from the mirror to the couch and turned on the Disney version.  I felt a flutter to see Snow White, but instead I found her cloying, saccharine.  Her honeyed voice was now shrill.  But when I saw the queen—those perfect cheekbones, that smoky alto—I flushed red.

Megan Taylor-DiCenzo teaches English Composition at a two-year college in Upstate NY.  She holds an MFA from Goddard College in Plainfield, Vermont.  She has had work published in Cactus Heart Press, Apple Valley Review, and Entropy Lit Mag.