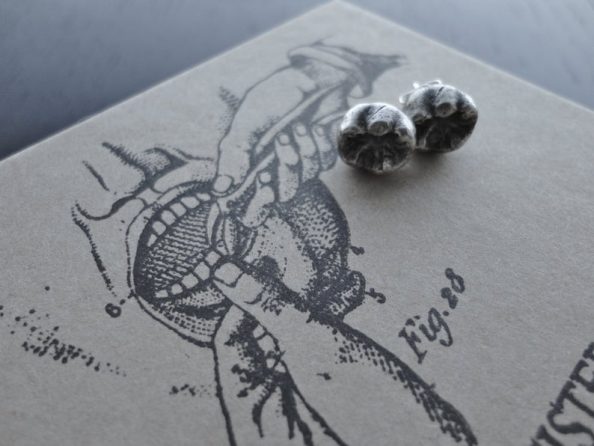 Chloe shoves her tongue between a jagged tooth and the pulp of destroyed gums beneath it. The pain is a certain kind of itch, so she presses through, flooding her mouth with the taste of red iron until the last corner is dragged from its tired skin.

Four paces to the left of the oak tree in the garden, she digs a small hole alongside the others and drops her most recent acquisition into its grave.

They say the city of Thebes was originally founded with the planting of teeth like seeds. Cadmus slayed a dragon, and at Athena’s command buried its fangs. From them grew a tangle of flesh and steel, the warriors on whose backs he created a city.

Chloe does not have a dragon to slay, but she takes a curved incisor from the neighbor’s dog, an old friend too loyal to bite down on the clumsy fingers invading his mouth. She also pilfers a plaque-crusted molar from her brother’s room after his visit to the dentist. It is riddled with small brown holes.

That night she discovers her own teeth are rotting too. She feels the enamel rapidly dissolving, decay permeating the inner layers. Eventually they dry and crumble. Gray dust powders her chest.

They say Cadmus founded Thebes and became a hero after abandoning his original quest to bring home his sister, Europa. She was abducted from the beach as a child and had since given birth to three of her captor’s children.

As of yet nothing has arisen for Chloe, but each white shell hums with potential when she sows it.

One night she finds herself rubbing a greasy balm into her cracking lips, stretched thin over far too many sharp, humming teeth. They push out of her gums in layers and seem to enlarge with each minute that passes until her oily lips reach their breaking point. She is relieved when they begin to tumble out.

The next night her teeth seem to be normal in shape and number. As she touches each one to make sure, a different note sounds and small white squares fall until her mouth is empty, the bedroom floor littered with a mess in the key of A-minor.

Upon discovering how influential Europa’s abductor was in Greece, our hero decided there was not enough evidence to take sides and left his sister to her fate.

Chloe’s grandfather has three gold teeth and cancer. He says both are common for people his age. If lumps of dentine and enamel can give birth to a fully armed militia, she tries to imagine what would spring from gold ones. In the mean time, she brings flowers to the nursing home in the next town over, carefully scanning the withered smiles her visit inspires.

Most of the teeth she finds there are smoke-stained and chipped; none are golden.

They say children who sleep with milk teeth beneath their pillows receive a visit from a mythical woman. They say she keeps the teeth and leaves coins in their place.

Chloe tries to imagine her after a long night, dumping yet another bucket of pebbles on a white mountain. Shocked by her classmates’ eagerness to trade something so precious for a handful of spare change, Chloe offers to double her competitor’s rates, and the following weeks are fruitful.

They say Europa’s son married someone whose story eventually mirrored his mother’s. Long before there was a wooden horse in Troy, there was a wooden bull in Crete. Pasiphaë’s experience was perhaps a more complex web of degradation and desire than what preceded it, but still we must take note of these patterns.

Chloe peers at her mother’s smile whenever she gets the chance. The teeth are straight and carefully whitened. She wonders if they also crumble and fall during the night.

Someday an adult tooth will push its way out of Chloe’s gums and she will greet it with eager pliers. It will already be in the process of sprouting, with beautifully curved roots that will make those starting to grow from the rest of her collection look like frayed threads. It will hum in her hand while she plants it.

For now she buries other seeds in the garden floor and waits for the beginning.

Jess Golden wanders around a lot and currently lives in a national park in Alaska. This is her first publication.