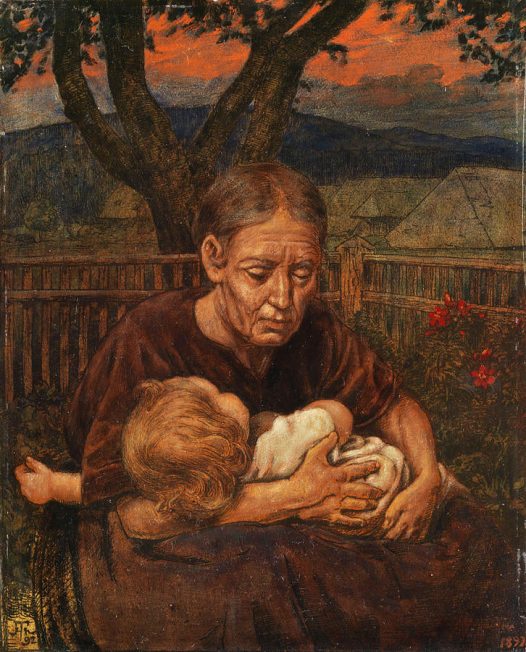 Draped in a long, heavy robe the color of a starless sky, she raised her knotted hands above her head, resembling in her fury, an enormous bird of prey. The villagers called her Sorceress, claimed her garden bewitched, but they were fools, afraid of shadows, their own and everyone else’s, especially hers, for she was a woman alone, with long silver curls, skin wrinkled as the apricots she dried, and those eyes, somehow still youthful, glowing like the moon and stars she danced beneath alone. Witch! What else could explain the life she lived?

Only the most desperate knew the truth: she was a Healer, her garden lush and vibrant with medicinal herbs, other greens, and an abundant array of plump berries. People came to her from all corners of the kingdom, when all other hope was lost, falling before in fear and reverence, like the thief-of-a-neighbor who fell at her feet, sobbing, desperate, terrified. He’d been caught stealing rapunzel from her garden to satisfy his wife’s cravings, for he was too miserly to fulfill the supplications of his wife, though he had the money, bags and bags of coins he’d buried in the yard. By the light of many moons, the Healer had watched him dig, bury, dig. Because they were close neighbors, her garden wall could not muffle the disgraceful words he spoke to the woman heavy with his child.

The Healer resisted the urge to bash in his skull with a stone.

She knew that he kept his voice low, his appearance genteel. He had the village fooled. But she had seen his wife too, her turquoise eyes clouded with despondence, despite the life blossoming within her. The Healer thought of his wife and unborn child as he sobbed, begging for his life, offering anything, anything, if only she’d spare him.

She settled into her demand. “I want the child your wife is carrying.”

The man hastily consented and scrambled away, forgetting the rapunzel he had picked.

The Healer believed she could save the mother and baby, set them on a new course, so while the kingdom slept, she prepared the tower where she would shelter them both. The Healer knew it would be a girl, for she had glimpsed her in the scattered light of the woman’s irises.

The Healer sat vigil until she heard the mother’s cries across the garden wall. Rushing to her side while the husband cowered in the corner, the Healer calmed and whispered, “I’m here. You’re safe. Breathe,” but not even she could stop the torrent of blood.

Before the mother faded from her daughter’s life, she begged the Healer, “Save my child from the life I’ve lived. There has to be another way.”

The Healer knew there was.