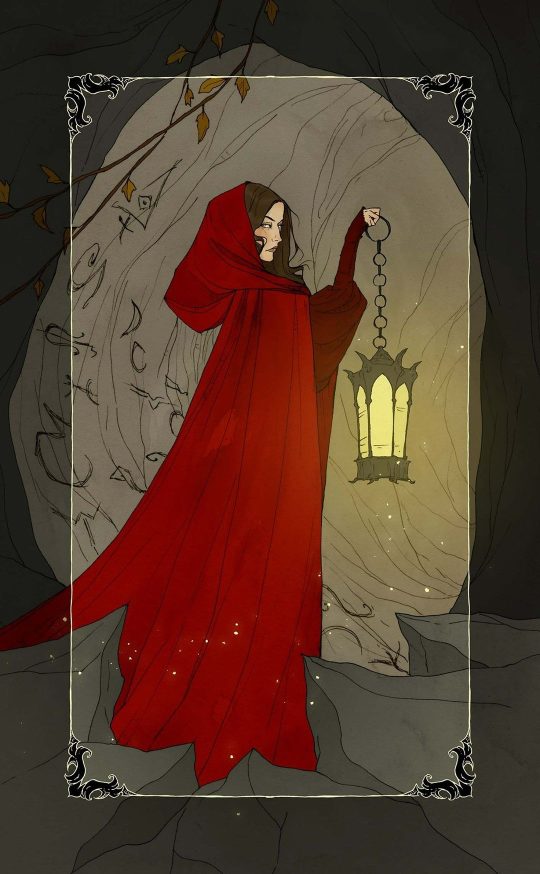 A Few Tips from Your Predecessor at Red Riding Hood Inc.

Congratulations on starting your new position as a Red Riding Hood Associate! Working for Eleanor is such a great opportunity to get your foot in the door in this industry. I thought I’d leave you a quick note with a few tips on how to navigate the role. After two years as Eleanor’s Red Riding Hood Associate, I’ve learned a lot about keeping her happy. Obviously, you should refer to the official Company manual that you got at orientation for the basic procedures and policies—this is just supplemental.

Eleanor prefers to work remotely from her cabin in the Grimm Forest. This cabin does not have internet and cell reception is spotty. Eleanor says that this is instrumental to her creative process. This means that you will be responsible for taking notes at all meetings, cataloging all queries and requests from colleagues that need her approval, and printing any correspondence, memos, or materials that require her signature or sign-off. Three times a week (Mondays, Tuesdays, and Thursdays) you will be required to bring these documents and any new mail to her cabin in person. On Wednesdays the office also receives her standing wine and cheese order, which the purveyor refuses to deliver to her home, so you will have to bring the basket with those items in it to her on Thursdays as well.

Eleanor expects you to share your calendar with her. Since she does everything analog, you’ll need to prepare your schedule ahead of time so that you can copy it to her wall calendar on Monday. It is important that the schedule does not change after you write it down. You should also leave her your cell phone number. Eleanor does not have her own cell phone, but she does have a landline, and she does use it often. Sometimes Eleanor forgets what day or time it is when she calls, but she is always gracious about rescheduling when you point it out to her!

Travel to the Grimm Forest cabin

Eleanor’s cabin is not accessible by car, so you’ll have to travel the last leg by foot. You can park at the southwest entrance of the forest; the Company will reimburse you for all your parking passes. (Susan has the forms, which you’ll have to sign in triplicate and deliver to LaRae on nine before the first of the month.)

Take the second path from the northern corner of the lot. It has a big elm tree to the left–you can’t miss it. This portion of the Grimm Forest is actually nationally renowned as one of the best wildflower meadows in the state. However, you should not dawdle too much on this path, despite the gorgeous views. Eleanor expects your prompt arrival on your delivery days at precisely 8:15 a.m.

At the first bend in the path, you’ll usually encounter the Wolf. Do not acknowledge him. Do not give him your name, your destination, or any details about the material that you’re transporting. Eleanor has a restraining order against the Wolf and he is not permitted within one hundred feet of her home. The order of protection also forbids him to communicate with any Company employee wearing the Red Riding Hood uniform or to inquire about Eleanor in conversation with any such employee. The Wolf knows all this but will try to test you. Stay strong on your first few visits. Eventually he’ll just retreat to heckling you as you pass by, which is not covered under the order of protection. (I’ve checked.)

The attached map has a route to the cabin. Take a picture of it with your phone. The thing that always helps me find her place is that it’s about ten minutes past the waterfall once you cross the footbridge over the wider of the two creeks. Soon enough it’ll be second nature.

On your first visit, you’ll alert Eleanor to your arrival by knocking loudly three times on the front door. After that, she’ll give you a key. Do not lose this key; copies can only be made once a year when the antique locksmith is traveling through this section of the Grimm Forest with his portable forge, and the waiting list is years long.

Eleanor works mainly from her bed and, sometimes, from the bath. She’ll want to spend as little time as possible in your presence, so as to keep her creative space free of interruption. Be efficient while greeting her when you enter into either room and do not make eye contact. You should immediately hand over papers for signature, read over your list of queries and updates, and take any notes from her on new tasks that need to be completed.

Mail and meeting minutes must be filed in the inboxes that she has on her desk in her office. Catalogs and periodicals go in the blue bin; letters go in the red bin; bills go in the green bin. Minutes go in the yellow bin. Mark each paper with a post-it note featuring the correspondent’s name, last name first, and then alphabetize each stack. Anything you need to pick up to bring back to the office will be in the black bin. (Make sure you check with her before leaving if she has anything else you need to take back with you as she sometimes forgets things she’s completed from earlier in the week.) You’ll find the wall calendar mentioned earlier in her office as well.

Eleanor appreciates it if you tidy the kitchen and office before departing, though she says it is not required. Remember to keep as quiet as possible when working in these areas as Eleanor does not like additional distractions during the workday.

While you are at Eleanor’s cabin, she expects you to handle all visitors. Unless she has noted a particular appointment on her calendar, you can just take a message at the door. Eleanor generally has all meetings by telephone and not at all on days when she’s working with her Red Riding Hood Associate (you), so you will find yourself sending away most people who stop by.

Mr. Huntsman is the most frequent visitor. He owns the cabin a few acres over and worked for the Company briefly in the 1990s, where he first met Eleanor. It’s in your best interest to minimize contact with Mr. Huntsman and dismiss him at the door; once he enters the home, it is difficult to get him to leave.  Be wary of his claims that he can ‘rescue’ you and offer you a better position in his own company. That company does not exist. The last Red Riding Hood Associate who indulged this line of thought ended up alongside Mr. Huntsman in stocks in the town square getting rotten fruit thrown at her face. (She was also terminated from her position at the Company shortly after.)

The Wolf may come near the edges of Eleanor’s property and howl. If he comes within range where you can see him, loudly threaten to call the Sheriff of Nottingham. You don’t need to actually call. The possibility is enough to scare the Wolf off. Don’t ask Mr. Huntsman to deal with him if he offers. Mr. Huntsman will inevitably come back saying that you’ve misunderstood the Wolf, need to give him another chance, haven’t considered all sides, don’t get the joke, and so on. It will be a huge waste of your time and then also Mr. Huntsman will be in the house.

Officially, your hours are 8am to 5pm, though as a salaried employee, the exact count of your hours is not your concern. You can typically expect to depart around your scheduled time, unless you have fixed tasks around the cabin to handle. Don’t attempt to leave early. Eleanor believes there is always something to do when you’re on the clock.

It’s best not to be in the forest after dark. If you are running late and staying past sunset is inevitable, or if there is snow, other inclement weather, or anything else that might detain you, Eleanor has a mattress in the attic where you can catch a few zzz’s. Just dust it off and you’ll be good to go.

Of course, the most important thing: don’t forget to lock up when you leave! Eleanor will likely not want to be disturbed to handle it herself and you do not want a panicked phone call when Mr. Huntsman lets himself in and drinks her special delivery wine order without asking. Don’t forget to keep your cell phone on and with you at all times when you are off premises, even outside of the Company office. Eleanor prefers not to leave voicemails if she can avoid it.

I wish you the best of luck in your role as Eleanor’s Red Riding Hood Associate. Eleanor is a visionary and one of the biggest legends in the business—you’ll learn so many valuable things working for her. It certainly was pivotal to the course of my career. We’re all rooting for your success!

Caelyn Cobb is a university press editor and writer living in Queens, NY. Her work has appeared in The Smart Set, HAD, Crow & Cross Keys, and elsewhere. You can read more at www.caelyncobb.com.