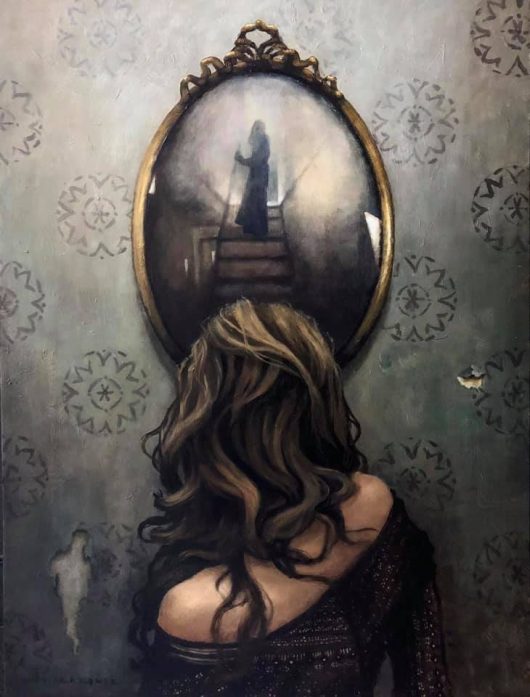 I didn’t mean to be evil. Ok? It just comes with the territory. Stepmother. Second wife. I’ve done this all before. I do. Happily ever after. Maybe that’s what they don’t like. The reminder that happily-ever-after sometimes doesn’t stick the first time around. Lands you here. With some children you never wanted and a husband that’s never home and seriously? Where was that in the pre-nup? She’s his daughter after all. It’s his house. Why isn’t he in it? Business. A businessman. Off on business. That’s what they always say. Who did he leave the little brat with before? Maybe that’s why she’s so comfortable with rodents. Fuck. Get the kid a nursemaid or something.

And it’s not that I don’t like her. I mean, I don’t like her, let’s be clear. It’s just that she’s so sure he’s coming back, each time he leaves. And she doesn’t even hate him for it. The leaving. Doesn’t stay up at night biting her fingers wondering if this is it – this house, these children, husband far away. And how’s that for a life? How’s that for a marriage. And this is my second ‘I Do.’ Ok, I’ve been around. I know the ropes. But I thought this time would be different is all, some stupid part of me, some part that’s still earnest and doe-eyed, and I better burn that out right quick. Show my daughters what’s what. Raise them up right. No delusions here. No birds that sing in harmony.

So sure, the ball. What has she ever done to earn a ball? Earn my trust? Who says she won’t go sweeping off into the night and then where does that leave her father? No. better keep her home. Better keep her humble. Better keep the fires tended for when he comes home. Cinderella. Well. It is kind of a clever name, after all, and if we don’t have humor, what do we have? I’ll keep my daughters laughing and my fires lit. I’ll keep this house a home by grit alone, let magic not so much as cower in the rafters.

And evil. Well. That’s a bit harsh. Is that what we call women who speak their mind? Own their own carriages? Who don’t fall at the feet of the youngest daughter? Is this what having a story gets you? This one could’ve been mine. If I was young. If I was fair. If I laughed just right and held my head to the sun. Danced well. Spoke less. Didn’t leave a name. Maybe that’s what they like. The mystery. The chase. The nameless beauty on the run. I’ll tell my girls this: never trust a man who falls in love when you run from him. Stand up straight and look him in the eye. But no one listens to me. Not the second-best. Second-well-loved. Step this. Step that.

All the love I’ve ever gotten I had to beg for. Knelt on the floor, down on my knees, wailed and whined. Fluttered my eyelashes. Ached for it. It didn’t help. Scraps, only. Barely a morsel. Starving still. Ravenous.

I want my fires hot, my peaches dripping, a love that will – finally – find its way home.

Jessie Ulmer is a queer writer and editor, an identical twin, and a swan by birth. She uses aspects of speculative fiction to explore themes of ability, physical and mental illness, gender, sexuality, and the intersections of identity within her work. She loves ghosts, impossible forests, the carnivorous sea, and believes in magic. Jessie delights in editing for Sword & Kettle Press, a tiny, independent publishing house that focuses on inclusive feminist fairy tales and speculative fiction. Her work has been featured in Gordon Square Review, Gingerbread House, Syntax & Salt, Corvid Queen, 3Elements Review, Pins & Needles: A Journal of Contemporary Fairy Tales, and Translunar Travelers Lounge. In 2020 her work, “Beneath Our Feet the Ground,” was nominated for a Best of the Net Award.

31 Aug This entry was published on August 31, 2022 at 12:03 am and is filed under 52 (August 2022), Current Issue, Fiction, Uncategorized. Bookmark the permalink. Follow any comments here with the RSS feed for this post.

Older: A Plea to the Great Seamstress
Newer: Selkie on the two-lane highway, South Dakota
%d bloggers like this: