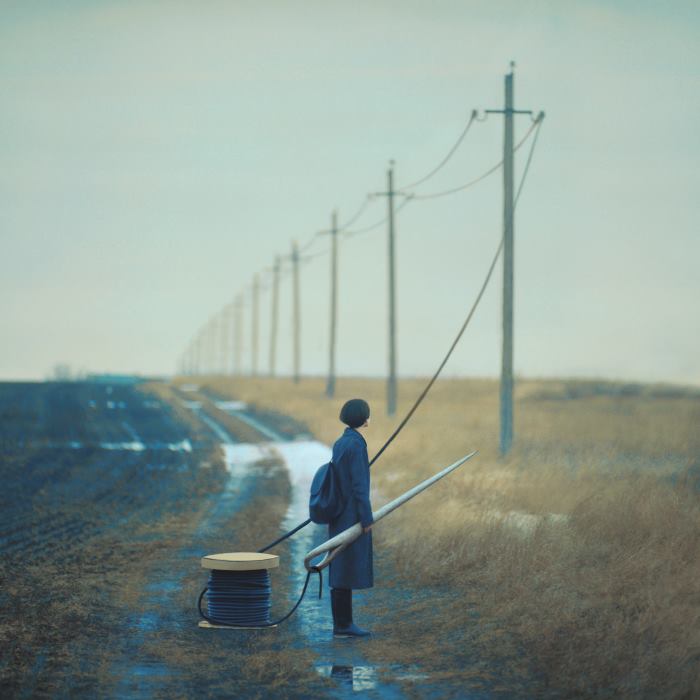 In the village near the Prince’s summer house, there lived a Seamstress known and feared for her wisdom and skill.

The Seamstress had only ever asked God for one thing: a daughter of her own, to teach and to guide. God ignored her, so she sang songs of magic and of patience, and sewed herself a child. The girl had dull button eyes and soft hands, but she smiled at her mother with a real smile. The Seamstress named her Rumpelstiltskin, and stitched her up whenever she got torn playing outside.

Rumpelstiltskin grew, and she learned songs of her own. The Prince rode by her home, and saw her standing in the dusk, letting herself be swayed by the breeze.

“Are you a scarecrow?” he asked.

“I am a seamstress and a maiden,” she told him. She rarely talked to people, and she did not know how to make her words smoother. “I would make a terrible scarecrow. One of my eyes was stolen by a magpie – that’s why they’re mismatched now.”

The Prince asked for her name, and she gave it, knowing no reason not to. He gave her his name in return, but it meant nothing to her at all.

Every night, after it was too dark to sew but not yet dark enough to sleep, Rumpelstiltskin met with the Prince, and sang him songs of thimbles, and of thieving birds, and of her mother’s secret sorrows.

When the summer came to an end, the Prince asked Rumpelstiltskin to become his bride.

She refused him. She chose to stay with the Seamstress and continue her trade.

The first day of the following summer, the Prince appeared at the Seamstress’s door. During his winter absence, he had fallen in love even more deeply. If he could not wed Rumpelstiltskin, he would learn from her, and he begged the Seamstress to give him permission to watch as they worked, and a place to sleep in her barn.

The Seamstress liked the Prince, and she knew her agreement would mean more than what was spoken. She was unsurprised when Rumpelstiltskin gave him permission to sleep under the kitchen table. She was only a little worried when Rumpelstiltskin invited him to share her room. He was a sweet enough suitor, and good enough at sewing hems and buttons. He was a poor singer, though, and she kept her songs away from him.

Rumpelstiltskin fell in love with him over the following winter, as her room grew cold and there was no-one to ask questions. She begged her mother for permission to wed him. This the Seamstress gave more reluctantly, yet she did not want to keep her daughter away from any joy or any danger.

In the summer, the Prince swore his eternal love to Rumpelstiltskin. They did not leave for the castle immediately, and instead spent a sweet summer together in the Seamstress’s home. The Prince learned even more of the craft. Rumpelstiltskin sang to him, and he warbled back at her, and there was a kind of harmony there, even if there was no real magic.

It was the Prince’s idea to take straw from the barn, and spin it into gold. He worked together with Rumpelstiltskin, and they were both pleased with the thought of taking such a simple thing and turning it into something so coveted. But when they presented the Seamstress with the fine gold thread they’d made, she was terrified, and ordered them to bury it in her yard.

They obeyed her, but the Prince stole a piece of the thread, hiding it in his mouth. It was a beautiful memory, and a fitting trophy besides. The Seamstress would understand, he thought, if she ever learned of it, though he hoped she never would.

In the autumn, Rumpelstiltskin left with her Prince and came into the city for the first time. The castle was full of sharp gilded things, and she would have to sew herself up every night. Still, she was pleased with the Prince and the Prince was pleased with her, and they were left alone by their courtiers, who feared Rumpelstiltskin’s mismatched gaze. For a little while longer, they were happy.

To celebrate the end of winter, the Prince arranged for a feast, and he talked loosely of his wife’s beauty and wisdom. A ring of alchemists formed around him – most of them had tutored him and had despaired of him in the past. He drank and drank, endlessly pleased with the family he had found for himself and the knowledge he had gained. Long after Rumpelstiltskin had gone to bed, he forgot his private promises, and bragged about the golden thread in his sleeve.

The Prince’s alchemists were not evil, but jealousy had marred them all even before they came into royal service. They would not stand to see some seamstress succeed where their books and cats’ skulls had all failed. They left the Prince asleep in his throne, and pronounced the Seamstress a witch.

Her village let the alchemists enter and spread lies. She was called Godless and monstrous, and she was called to create gold out of nothing, just to prove her willingness to serve her neighbours. When she refused, she was tortured to death. They cut her up into pieces and buried her in her own garden.

Rumpelstiltskin saw this in a dream, and she rode with the Prince back to her mother’s house. She found it burned down, with all the fabrics stolen or soiled. She dug all night to find every piece of her mother. Rumpelstiltskin used the buried thread to sew the Seamstress back together.

Warmth did not return to the Seamstress’s eyes.

Rumpelstiltskin understood what had happened, and with no hesitation, she plunged her tiny scissors into the Prince’s chest. She found his heart, shrivelled with grief and shame. She cut it in two. Half she sewed back neatly, and pumped until it started beating. The other half, she sewed into the Seamstress, and sang until her voice gave out, and until her mother smiled.

When the Prince woke, he found his wife collapsed with joy and exhaustion. The Seamstress sat beside her, singing lullaby. The Prince crawled over to them, searching for words to beg forgiveness. But none would come – Rumpelstiltskin had sewed his mouth shut.

“You paid for your foolishness,” the Seamstress told him, “and I paid for my own. Will you leave her, now?”

All he did was shake his head. Without speech, he could not rule, but he could stay here, and re-build the house.

When Rumpelstiltskin woke, her husband was by her side. His chest was half-empty and his mouth was closed, but he kissed her as warmly as he ever had.

Emma Gorka is a writer and poet from Eastern Europe. She likes complicated love stories, bargains, and transformations. See more of her work here: https://emmagorka.wordpress.com/publications/